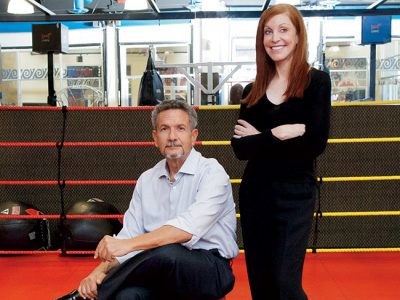 At 6 am in a suburb of Manila in the Philippines, a directive from Las Vegas set off a recent ruckus in the living room of featherweight boxer Nonito Donaire. He was fast asleep and had instructed the housekeeper not to disturb him under any circumstances. But a visitor insisted that Donaire be roused from slumber. Certain that she was putting her job at risk, Donaire’s housekeeper woke him up. Bleary-eyed but out of bed, the Vegas-based pugilist saw an American woman with a carrying case. He knew what she had come for: his blood and urine. Donaire had signed up with the nonprofit Voluntary Anti-Doping Association, agreeing to be tested for drugs at any time, with no warning. Without argument, he gave his visitor what she requested.

The association was launched in 2011 by Dr. Margaret Goodman and Dr. Edwin “Flip” Homansky, partners who share long histories as ringside physicians. Homansky has worked some 2,000 fights, including classic confrontations featuring Thomas “Hitman” Hearns, Sugar Ray Leonard, and Mike Tyson (yes, including the ear-biting incident). He served as chairman of the Nevada State Athletic Commission’s Medical Advisory Board, was vice president of the Association of Boxing Commissions, and has lobbied vigorously for enhanced drug testing. Goodman, a neurologist, consulted with the New York State Attorney General’s Office on neurological injuries in boxing and rose to the post of chief ringside physician. They share a love of boxing and a desire to see combat sports remain pure.

The physicians launched VADA in response to what they felt was a lax attitude toward performance enhancing drugs in the worlds of boxing and mixed martial arts. Over the last three years, Goodman and Homansky have devoted much of their time and resources to helping fighters prove that they’re clean and to offering free education through their organization, which is funded by donations as well as the financial support of athletes, promoters, and sponsors that care about keeping fights clean. “There’s a lack of knowledge among regulators of boxing and mixed martial arts,” says Homansky. “Early on, for example, they didn’t think anabolic steroids would do any good for non-heavyweights who want to be fast and lean. But that’s just ignorance. Drugs can be used in cocktails that create anything you’re looking for, whether it’s speed or bulk.”

In Nevada, steroid testing began in 2001. “But it’s still not done correctly,” Homansky points out. “Athletes know when they’ll be tested” and can time their drug use. VADA operates differently: Testing times are random, and any fighter who fails to be available within 60 minutes of being approached receives a warning. If it happens a second time, he is out of the program. Those who have signed up with VADA include Ultimate Fighting Championship greats Georges St-Pierre and Roy Nelson and boxers Manny Pacquiao and Timothy Bradley.

Recognizing the importance of keeping boxing and MMA clean and credible, particularly in Vegas, the doctors work zealously to set an agenda they hope will one day become standard. “I talked to different commissions about anteing up [requiring stringent testing],” says Goodman, whose novel Death in Vegas will be published this fall. “But even as performance-enhancing drug use was common, nobody would do anything. So we did it. There are fighters who want to show a commitment to clean sports—and they want their opponents to be clean as well.”

The VADA process is state-of-the-art and comes with consequences—including being reported to various athletic organizations—for those who fail the test. “We test for hundreds of things,” says Goodman. “We test for human growth hormones. We test for EPO—the most common form of blood doping, it increases the number of red blood cells. But athletes don’t need fancy drugs. They can just walk into an antiaging clinic and get a testosterone prescription. It’s a successful doping drug because it has a short life in the blood and can easily be timed to not show up when you don’t want it to.”

Although Homansky and Goodman agree that harsher penalties and more-stringent testing can help keep drugs out of boxing and MMA, they also believe that education goes a long way. Along those lines, they helped put together a seminar at Las Vegas’s Cleveland Clinic Lou Ruvo Center for Brain Health, spoke at the Association of Boxing Commissions, and, through VADA, advise athletes who want to know which supplements are legal and which are not. Sometimes, in fact, it’s not illicit drugs that cause a problem. Goodman remembers one fight in which a cornerman could not get his boxer’s nose to stop bleeding. “I later found out that he was taking anti-inflammatories before the fight,” she says, explaining that they thin the blood and make clotting more difficult.

And sometimes fighters just need to be protected from the people closest to them. “Young athletes are guided by promoters and managers who can be enablers—these people may only care about the fight going on and getting paid,” says Homansky. “It’s possible that fighters can take things without even knowing that they’re illegal. Every morning, let’s say, the fighter gets a smoothie, made by his trainer. Typically he has no idea what’s in it.”

Now, Goodman says, with the help of VADA, “He does.”
Read more at http://vegasmagazine.com/personalities/articles/what-former-ringside-doctors-are-doing-to-keep-combat-sports-clean#kVqeGfmIbHRyQPFy.99

The Voluntary Anti-Doping Association (VADA) is a tax-exempt 501(c)(3) organization. All donations are tax deductible under section 501(c)(3) of the Internal Revenue Code.